A History of the French Bulldog

The French Bulldog (often shortened to Frenchie) has long been one of the world’s most popular dog breeds, known for their refined breeding and loving companionship. As the name would suggest, the French Bulldog’s origins lie partially in France, but the breed also owes much of its history to contributions by breeders from both England and the United States. The basis of the Frenchie is the Old English Bulldog, a breed that is now extinct, but whose traits have been passed down to many modern breeds. This ancestral breed was primarily used for the English bloodsport of bull-baiting, and had gained much popularity in England by the early 1800’s.

At this point many breeders began to modify the breed. Some bred the Bulldog into a bigger, heavier dog with exaggerated features. Others began crossbreeding with terriers, developing a smaller, lighter toy bulldog, having either upright or rose ears, round foreheads and short underjaws. In 1835 bull-baiting was outlawed in England, and this new smaller variety of Bulldog rose in popularity as a companion dog. These were quite popular with workers in the English midlands, in particular the artisans in the lace-making industry around Nottingham. After the industrial revolution in the 19th century, many of the British workers were left unemployed and some of them moved to Normandy on the French coast, bringing their Bulldogs with them. 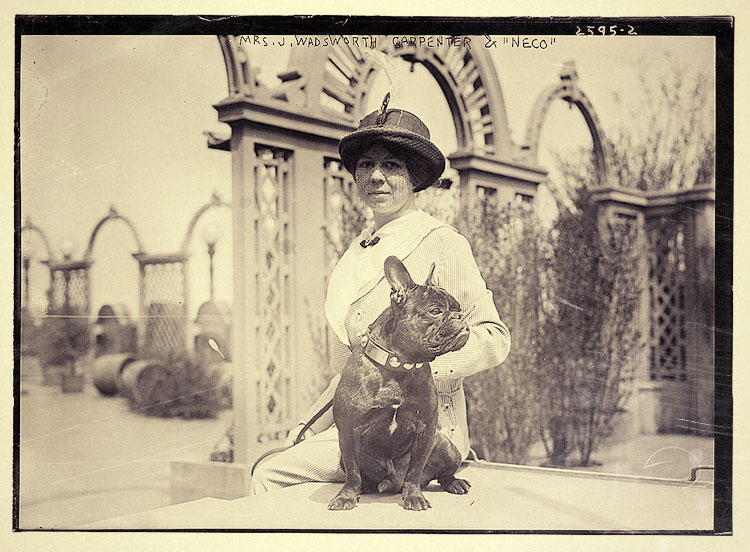 The breed began to gain popularity in France, especially among commoners like butchers, traders, and café owners, and notably became favorites of the notorious Parisian prostitutes of the era. Soon English breeders had a lively trade going, exporting the smallest of their litters across the English Channel, and in time French breeders began to further modify their characteristics until it became considered a separate breed entirely. Around this time in the late 1800’s, wealthy American travelers visiting the French Riviera came across these dogs and fell in love with them. They were brought back to the States and became darlings among the upper class of the East Coast. 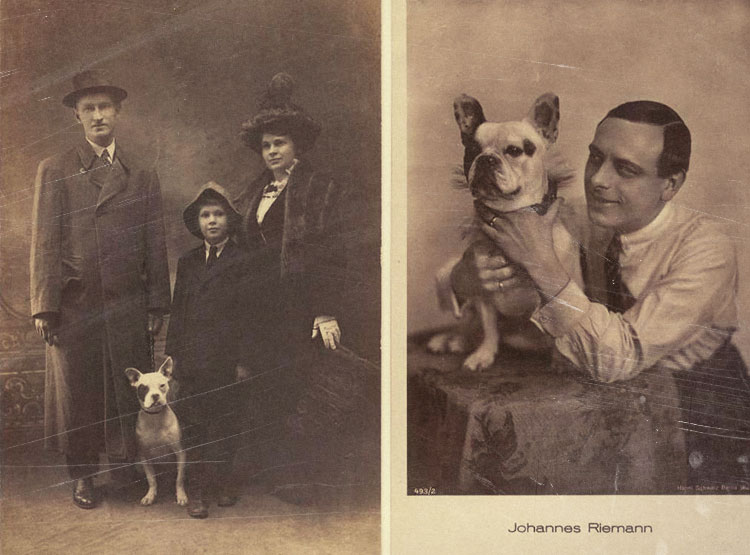 Interestingly, there was great controversy between American and European breeders with regards to the shape of the breeds ears. American breeders preferred the upright “bat” ears while the Europeans preferred the folded-over “rose” ears, which were more akin to the ears of the original English Bulldog ancestors. It was this very controversy that led to the formation of the first breed club dedicated to the Frenchie, the French Bulldog Club of America. Today, the bat ears have endured as the contemporary breed standard.

In 1896, the breed was first exhibited at the Westminster dog show, and were featured on the cover of the Westminster catalogue in 1897. Soon after, they were registered with the American Kennel Club, and the breed standards we know today were solidified. They remained popular for several decades but during the Great Depression of the 1930’s their popularity fell off, along with interest in purebred dogs of all kinds. A small number of Frenchie breeders in America and Europe kept the flame alive but by 1940 French Bulldogs were considered a rare breed and only 100 were registered with the AKC.

So they remained until a breeder from Detroit, Amanda West, began showing Frenchies again in the 1950’s with phenomenal success. The 1980s witnessed a rapid rise in Frenchie registrations due to a newly energized French Bull Dog Club of America. Since then, the popularity of these little dogs has soared.

Physically, Frenchies are well known for their short snouts and their upright bat ears. They retain the stocky robust body type of their fighting ancestors but in a much more compact size. They typically weigh less than 28 pounds, and have a height between 11-13 inches, and live for up to 12 years. They are quite intelligent and have a playful disposition, making them excellent companion dogs, both as show dogs and for family pets.